DISSEMINATION OF MSLOOP’S RESULTS IN THE 23th ANNUAL SolarPACES CONFERENCE 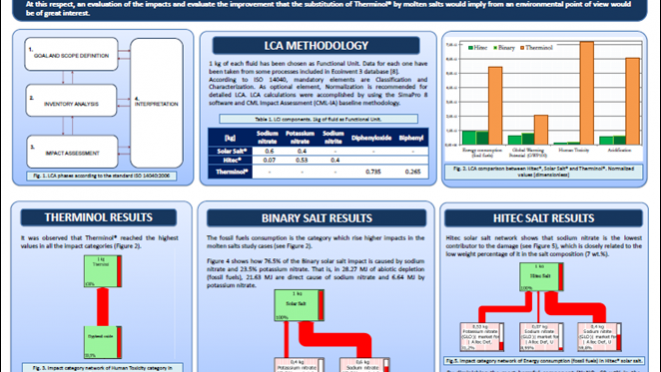 SolarPACES 2017 was held in Santiago de Chile in September.

Universidad Complutense de Madrid presented a poster entitled “Life Cycle Assessment of the Fluids used in a Concentrated Solar Power Plant” that included some of results obtained in the frame of MSLOOP project.

From September 26 to 29, 2017, the 23th Annual SolarPACES Conference, SolarPACES2017, was successfully held in Santiago de Chile. It gathered many attendees, representing more than 38 countries. The conference brought together the main actors of industry, plant owners and researchers related to CSP field.

The MSLOOP project, its activities, and some of its first results were presented to the audience during the poster sessions. Specifically, UCM presented a poster related to the environmental impact of the main fluids currently used in CSP plants.

This work, entitled “Life Cycle Assessment of the Fluids used in a Concentrated Solar Power Plant”, had great acceptance and raised many questions with attendants sharing diverse ideas and proposals.

Finally, attendants asked for the status of the research area, project goals, and expectations with respect to the project outcome. Although all questions were answered, the attendants were invited to assist to the MSLOOP Dissemination Workshop that is planned to be held at the end of the project in 2019.

MSLOOP 2.0 project started in November 2016 and is being developed by a European consortium composed of five partners from three European countries: Spain, Germany and Italy. The project is led by COBRA and is receiving funding from the EC under Fast Track to Innovation Programme (H2020).

The MSLOOP 2.0 consortium consists of a multidisciplinary team formed by five partners; COBRA, Universidad Complutense, Archimede Solar Energy, Sbp sonne gmbh and CADE in strategic fields within solar thermal sector. This composition will boost an innovative development capable of achieving a strong positioning in the market.