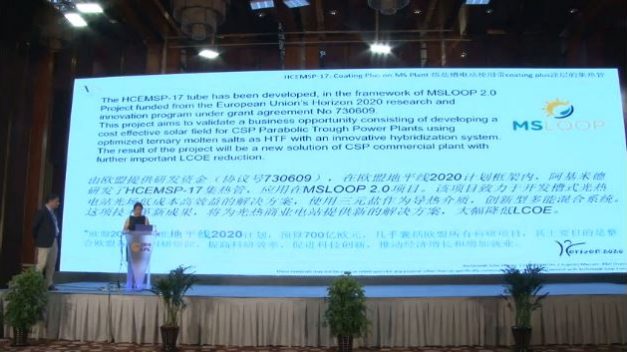 From June 20 to 22, 2018, the 5th China International CSP Station Conference and CSPPLAZA 2018 Annual Conference, was successfully held in Beijing (China). With 861 participants from 363 companies and institutions and 66 exhibitors, CSPPLAZA 2018 was a great success.  The conference gave an important update on Chinese and International CSP projects. Most of the main industry leaders, plant owners, manufacturers, suppliers and researchers attended the conference and discussed the current and future opportunities in the Chiense market.

Some of the MSLOOP project results were presented to the audience with an oral presentation. Specifically, Archimede Solar Energy gave a speech presenting the innovation in the Molten Salt receiver developed in MSLOOP and its impact on the LCOE reduction.